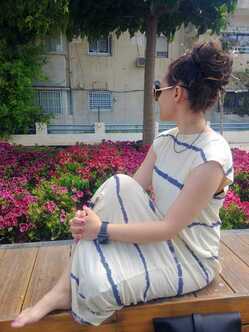 I feel called to support people in exploring, embracing, and integrating mystical and self- transcendent states into a down to earth fully human, fully divine experience that cherishes the paradox of being individuals who are separate and always one with each other, as unique expressions of the entire universe...
​
I've been drawn to the mystery of existence, ever since I was a little girl, periodically stunned by the mere fact that anything exists at all. These were my early collisions with the unfathomable, when I found myself tangled and wrestling with what felt like the utterly arbitrary, absurdity of our inexplicable existence, and the fabric of normalcy that's woven to veil it.

Later catapulted beyond my sense of self,  that veil incinerated, marking a sea change in my relationship with the nature of existence. I was no longer trying to weave the veil tighter, but to unweave it diligently, and bravely meet what would be revealed in the wake of its unraveling. Since then, I've found myself exploring the nature of identity, reality, and my place within it, venturing out beyond the confines of consensual reality. I have been and always will be plumbing the depths, intellectually, spiritually and physically of existence, and how what we find there can help us go beyond our limited conditioning, ease and make meaning out of suffering, and empower one another to more consciously create our lives, living this precious sweet-bitter existence more deeply, joyously, and fully.